It has been quite some time since I last baked a chiffon cake as my previous attempts had been unsuccessful due to the ugly looking cake when dislodged. Taste wise, it was good but presentation was rather unappealing. So, the picture was never made public here. LOL!

Without further ado, let me show you my Orange Chiffon Cake which I baked yesterday evening after coming home from work. Mom was in hometown at the moment and Dad was out yesterday evening. So, it was easier for me to maneuver around the kitchen. I love to do baking when there is no one around to bother me. I am sure you too love to do things in peace, especially when it requires a lot of concentration. 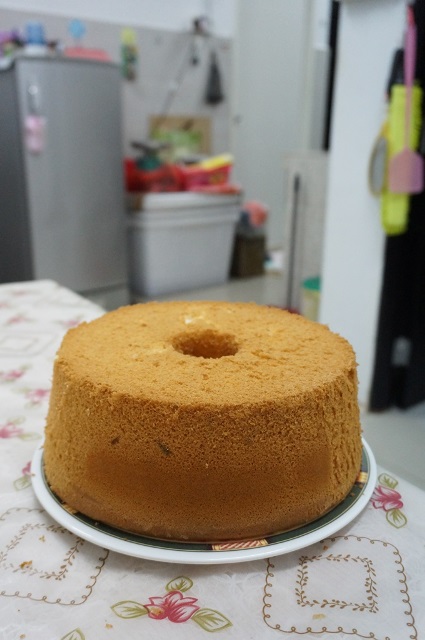 Directions:
Mix dry ingredients together – cake flour and salt. Set aside.
Beat egg yolks with 2og of fine granulated sugar until pale and creamy.
Add in oil, orange zest and juice and mix until well combined with a balloon whisk.
Sift in the flour mixture and mix until no flour lump could be seen.
In another clean bowl, beat egg whites with cream of tartar until it turns frothy.
Gradually add in 80g of fine granulated sugar in three batches until it reaches stiff peaks.
Gently fold in one third of the meringue into the orange batter and repeat the same with the remaining two thirds of the meringue until no white streak could be seen.
Give the bowl a few taps on the worktop to break the air bubbles trapped inside the batter.
Pour batter from a height into an ungreased 22cm/23cm chiffon pan and bake in a preheated oven of 170 degree Celsius for 30 to 45 minutes or until an inserted cake tester comes out clean.
Invert the cake immediately when removed from the oven or until cool enough to be unmoulded. 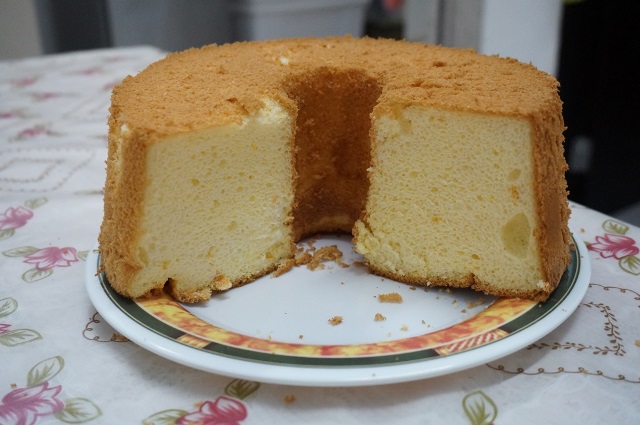 So, this was my end product when the chiffon cake was sliced. I gave three slices to both Sister and Jennifer so that they have something to munch on while they are on the plane to New York this weekend.

The texture of the chiffon cake was soft and fluffy. It has a not so subtle hint of orange taste. Albeit I had reduced the sugar quantity by nearly half, Dad mentioned that the cake was a bit too sweet. Well, I think the sweetness was probably from the orange juice rather than the sugar.

All in all, this recipe is definitely a keeper for me. If you are into something citrus, light and yet refreshing at the same time, do try this recipe and I am sure you will love it too.