Decided to blog today after the short hiatus as Jia messaged me on Skype asking me why the lack of update for the past two weeks. But no worry, I will be back on track starting from today. Both Mom and I came back from Miri yesterday afternoon from an overnight stay. We drove to Miri on Sunday morning. To be honest, I expected a long queue at the checkpoints. But surprisingly enough, both immigration and custom clearance for both sides took us less than 30 minutes.

Anyways, further details will be covered in my next few blog entries. After our stay at Kingwood Boutique Hotel last month, I decided try out Pullman Miri Waterfront this time round. Before leaving the hotel for Brunei yesterday afternoon, Mom and I had lunch at Le Cafe which is located in the lobby area of Pullman Miri Waterfront. 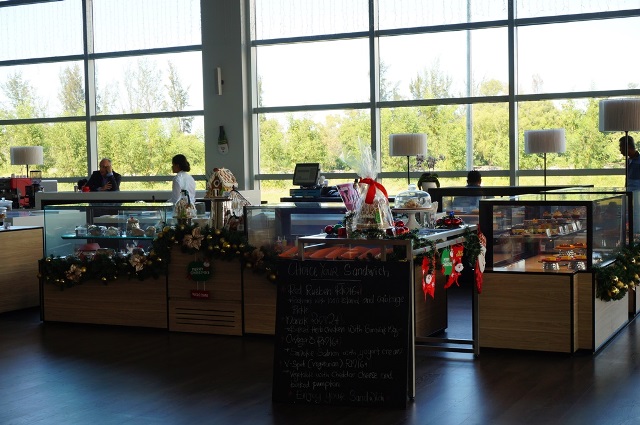 The cafe was decorated with Christmas feel as Christmas is just around the corner. Le Cafe offers both cake and sandwich of the month at a reasonable fare. Mom was intrigued to try out their cake of the month as it was something with durian.

Apart from the usual selections of sandwich of the month, you could choose other choices of sandwiches available. To be honest, I wondered how Sarawak Mayo tasted like. I was intrigued to try Omega 3 but Mom is not a fan of raw salmon as compared to me. 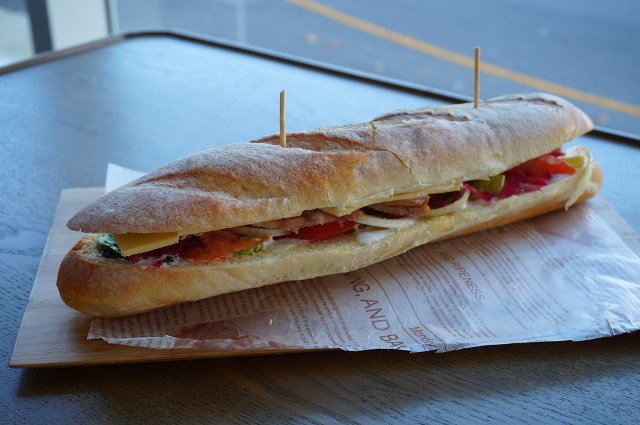 I ordered this to share with Mom as sweet dessert alone for lunch was not enough for me to last through dinner. Ing had this with her friend before me and she mentioned that it was extremely good. As Mom and I do not eat beef, I requested no beef is to be added into the sandwich. I liked the texture of the baguette. It had a crunchy crust and yet soft on the inside.

The portion of fillings was generous as well. Instead of using the commercial sliced cheddar cheese which you could get from local supermarkets, they were using block cheddar cheese. The cabbage was pickled hence it gave a crunchy texture when bite into. Dressing wise, they were using French dressing and it was good.

Ice Lemon Tea which came as a set with my Super Sub Sandwich. Sugar syrup was served separately in a shooter glass. The waitress did not mention anything about the sugar syrup so I took a small sip to confirm my suspicion. I liked that they are serving sugar syrup separately as patrons usually have different preferences for the level of sweetness they want in their beverage. I, for one do not like overly sweet beverages.

Mom is okay with anything that comes with durian. So, she told me that we could have this as supper on our first night in Miri. I said no. Durian dessert is too heavy for me as supper. So, she suggested that we have it for breakfast since it was still early before our breakfast arrangement with a friend. Unfortunately, the cafe is not open till 10AM. So, we had it as lunch instead before heading back to Brunei yesterday afternoon.

To be honest, there was nothing much to rave about this dessert. The taste of durian was very distinctive and it was on the salty side. However, the chocolate layer at the bottom neutralize the saltiness from the durian cream. All in all, it was a passable dessert but not heavenly good. Mom said that Flour & Butter Cafe did better with their Durian Cake.