I did hair rebonding last Sunday afternoon. I had wanted the morning slot but I was too late to call for appointment. So, I got the noon slot instead. The hair rebonding process took about six hours in total. I would delay hair rebonding as long as I could as I didn’t like the idea of sitting for hours doing nothing. Another reason is that I hate not being able to wash my hair for the next 48 hours.

It was almost 6PM when I stepped out of the salon. As Brukori is just nearby, I decided to drop by for an early dinner hoping that they would have Kimchi Stew. It was no surprise to me when I saw the “Not Available” notice pasted onto the menu of their Kimchi Stew. However, I noticed that they had expanded their menu and they have Tofu Stew if I wasn’t wrong.

Without further ado, let me show you what I had for dinner at Brukori the other evening!

One of my favourite dishes at Brukori is their Bibimbap. I think they serve the cheapest Bibimbap across the Sultanate for the portion and quality. Do let me know if you had ever come across better and cheaper ones. The only downside is that Brukori doesn’t offer much Banchan like other Korean restaurants do.

The Vegetarian Bibimbap was served with various vegetables, topped with a perfectly done sunny side up, seaweed flakes and white sesame seeds as garnish. Sitting underneath the toppings was a cup of red rice. The portion was as usual too much for me but I attempted to finish as much as I could. My favourite way of eating Bibimbap is to toss in all the Banchan provided. I left out the anchovies as I did not want them to affect the overall flavor of the Bibimbap.

If you love lamb, Brukori now has Lamb Bibimbap to choose from among their other toppings of Bibimbap.

I was a frequent visitor of Roasted Sip, Serusop last week with San Diann and King. After dinner at MeetUAll Korean Restaurant last Tuesday evening, we went for coffees. San Diann had suggested Verve Caffe since the said cafe is located very near to our dinner venue. I wasn’t as keen as he was as Verve Caffe is never my favourite spot for coffee.

My favourite cafe spot for caffeine fix is Roasted Sip and I managed to convince the two guys to go. The location was a bit out of the way for them but they agreed for the love of good coffees. LOL! 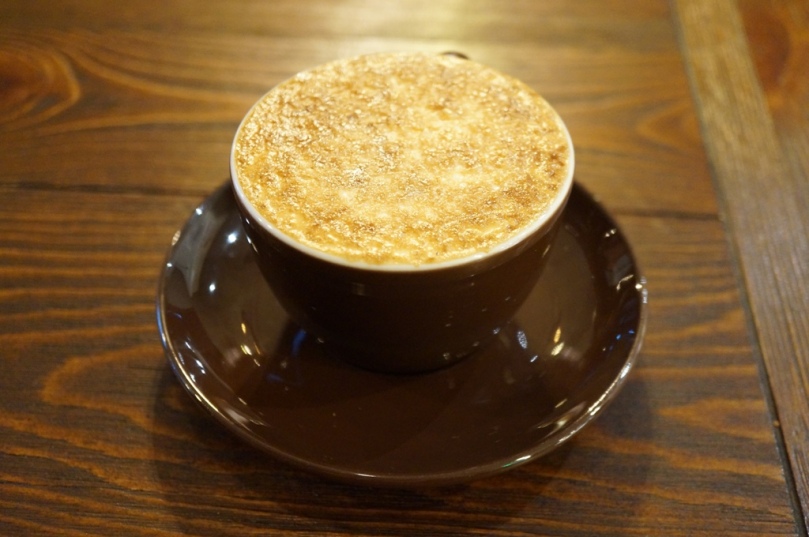 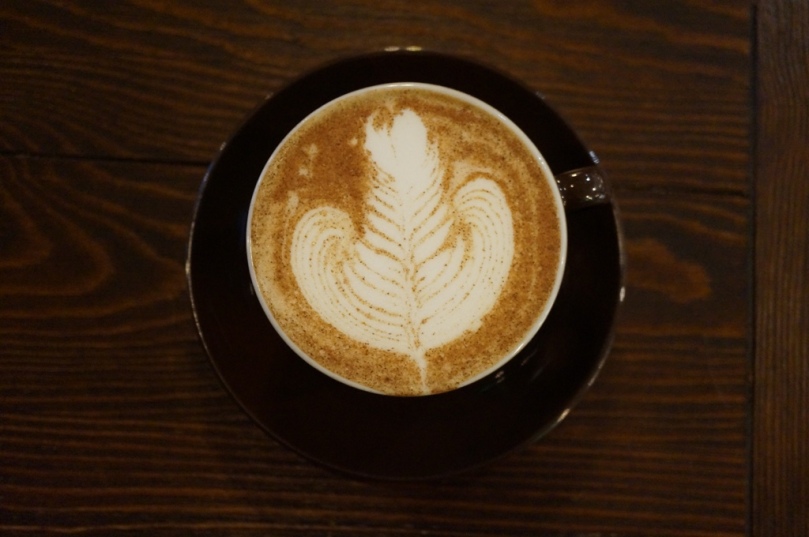 As usual, I had my favourite Spiced Chai Latte and asked if they already had soy milk. The Cashier told me that they would only start having it at end of the week and they had also included another non-dairy milk option apart from the regular soy milk.

For lactose intolerant, you are now spoilt with choices. They now have both soy milk and oat milk! I see that non-dairy options are in the trend now as quite a number of our local cafes now offer soy, oat or almond milk in substitution of dairy milk. If you are lactose intolerant like me, you know where you can go for your caffeine fix.

As I had been reducing wheat consumption in my daily food intake, I chose the one cake that appeared to have the least wheat content (at least to me). Their Mango Cheesecake was decent and I liked that it was very sweet. The level of cheesiness wasn’t too overwhelming and was in my acceptance range.

I had been craving for their Mushroom and Spinach Quiche. I returned yesterday evening with Mom but only to find out that they were closed earlier for an event.

I didn’t manage to update yesterday as I was out and about most of the day. I spent half a day at the salon doing my hair. I started the day with my weekly morning walk at Tasek. I was reluctant to go. I kept peeking through the window to see if it would rain but it didn’t. So, I dragged by bum, drove out and sweated a little during the walk. However, I couldn’t help but noticed that my motivation had worn off a little. Sister told me to eat more to keep the motivation going.

Matcha Mana Co is located in the same building where Singapore Airline is but they are the ground floor. You go in from the side entrance where DeRoyalle Cafe used to be. The cafe wasn’t very big in size but I liked the minimalist and simplistic interior design. One of the Instagram foodies asked if Matcha Mana Co offers dine in. Yes, they do but subjective to seats’ availability as the bar counter could only seat about three to four.

Their opening hours is a bit short in my opinion and I do hope that they would extent in the near future. They are currently on soft opening stage. So, their menu option is yet extensive in my opinion. I think they might be serving desserts in the near future as they had installed glass shelf which I do think is for desserts. I may be wrong though.

I took a longer time scanning through the menu before settling with their Matcha White Chocolate. For Matcha lovers, I am pretty sure you would be spoilt with choices. I had wanted to try Hojicha Latte too but it can wait. What I had was a regular iced Matcha Latte but sweetened with Belgian white chocolate.

The said chocolate was in the form of liquid which I assumed was melted Belgian white chocolate. As I had requested for less sweet, they reduced the amount of the white chocolate sauce. The Matcha powder was properly dissolved but it left a powdery aftertaste. I liked what I had but it lacked the bittersweet taste which I adore in Matcha beverages.

I was excited to see that they serve non-lactose milk options! For lactose intolerant, you are spoilt with choices. They are offering soy and almond milk but at a dollar extra. I liked that they are not serving regular brands but So Good! Price was on the steep side in my opinion. I had soy milk and my total bill came up to B$8.90 for a cup of iced Matcha Latte.

One of my to-try foods at the Consumer Fair was churros by Alan’s Churros. In spite that I had been reducing wheat from my daily food intake, I couldn’t resist this sweet dessert.

The three of us ordered a portion to share so that we could have extra tummy space for others. One of the staffs suggested two portions as it would be a dollar cheaper. We stick to one portion as I knew I would only take a stick out of the portion. 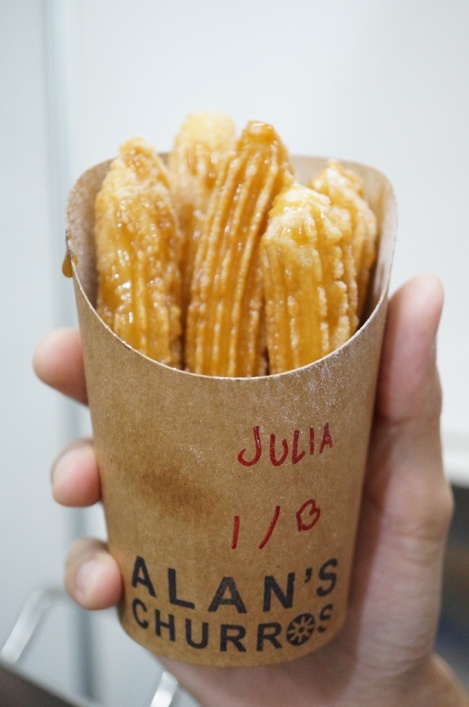 We were being told to wait three minutes for the churros to be served after placing our order. A portion of churros was served with five sticks (I think). You get to choose one topping and a sauce of your choice from the options provided. They had icing sugar and cinnamon for toppings whereas chocolate, white peanut and butterscotch for the sauce.

I had wanted cinnamon but they ran out of it so icing sugar it was with some butterscotch sauce. The three of us loved the crunchy exterior of the churros but the filling was tad wet. The combination of icing sugar and butterscotch was surprisingly not as sweet as I anticipated. If I were to return to Coffee Field for the churros, I would go for cinnamon with chocolate.

I visited the annual Consumer Fair at ICC yesterday evening with San Diann and King. San Diann and I had intended to go on Sunday morning but decided to make do with Friday evening instead so that there wouldn’t be much time constraint for us. San Diann went with three food priorities and one of them being the Salted Egg Soft-Serve from Bite Twice.

As far as I knew, Bite Twice is not selling soft serve ice cream on regular basis and these two flavors are their limited edition products in conjunction of the Consumer Fair.

As we were waiting for our desserts to be ready, I asked the person-in-charge whom I assumed to be the owner which one of both the flavors is the current bestselling. She replied that it was the Salted Egg as it is not a common flavor for a dessert and majority are willing to try.

As the staff was preparing San Diann’s Salted Egg Soft Serve Ice Cream, he requested her to make it nicely so that he could take nice pictures. That statement somehow made the staff a little bit stressed out. LOL! It turned out that she did very well with San Diann’s order.

The dessert was topped with some salted egg coated cornflakes. The dessert smelled distinctive of salted egg and the topping added some crunch as well. I didn’t try any of it as I wasn’t a big fan but San Diann liked what he had. 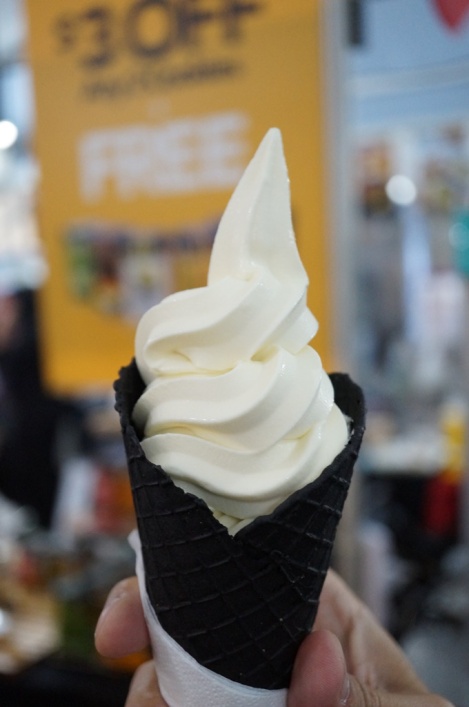 King and I on the other hand had Musang King Soft Serve Ice Cream. Presentation wise, I think San Diann’s outshone mine. LOL! The dessert smelled distinctive of durian on first impression before taking the first lick. I wouldn’t say Musang King as I had never tried the real Musang King before.

The soft serve ice cream had a smooth and creamy consistency. However, it tasted a bit sour after a few licks. I thought it was my personal opinion but King agreed to the same thing as well. The waffle cone was black in color which I assumed to have been made with charcoal powder. It didn’t leave any unique taste or so. It was just your regular waffle cone but black in color.