Clara’s birthday was last Tuesday and Chen Wei organized a surprise belated birthday gathering at Senja Restaurant. Clara will be moving to Labuan in early March next year to settle down early as she will be getting married in September 2018. So, we thought we do this birthday gathering before she officially moves to Labuan to be with her husband. She’s legally married by the way but wedding banquet will only take place in September next year.

The first intended date for the belated birthday gathering was set to be last Friday but it was postponed to yesterday as one of us couldn’t make it. Chen Wei prepared everything from scratch, venue’s reservation to decoration set up. Kudos to her hard work and effort in making this event a huge success despite that Clara was feeling dubious the moment the waitress escorted her to our private room. LOL!

Table set up by Chen Wei. She’s a full time interior designer but she can do freelance too. She brought all the props from home and set it all up by herself with the help of Shew Hiang and Kiaw Han. She even brought her own mini Christmas tree pot.

Chen Wei ordered Earl Grey Chiffon Cake with cream cheese frosting and requested for gold drips. The drips didn’t look golden but orange in color. Surprisingly enough, the drips looked slightly more golden in picture than in real life. The cake was decorated with fresh flowers. The Earl Grey sponge layers were wet in my opinion. The cream cheese frosting was creamy and slightly salty but it was good. However, it can be a bit sickening when overdose. 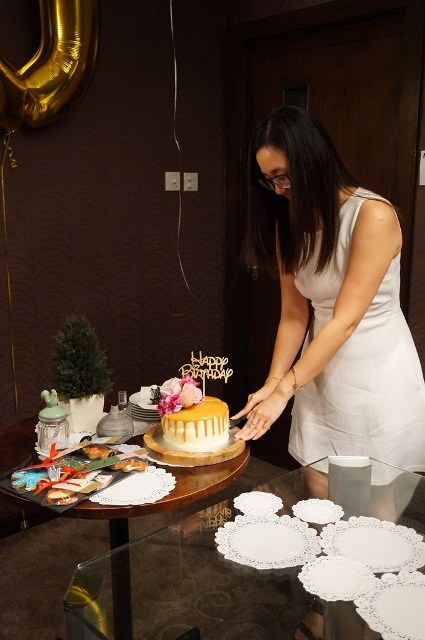 We requested one of the waitresses to take us a group picture but the outcome wasn’t satisfactory. So, I used one of Chen Wei’s props to make do as my tripod. It took me at least four to five attempts to get this shot. It wasn’t the best one either but at least good enough as compared to the others.

Now that we are done with the birthday pictures, let’s get started with the food pictures! 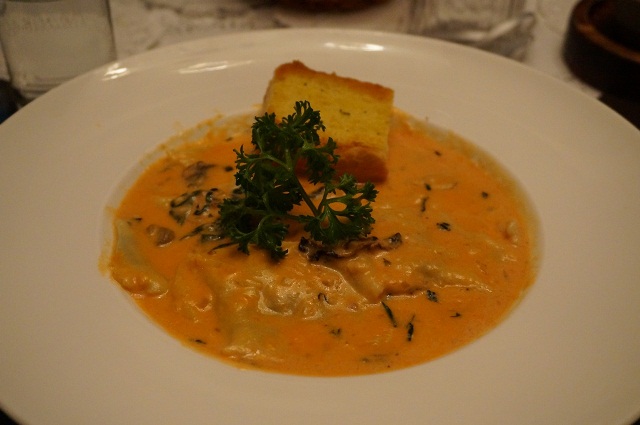 with lemon cream and garlic sauce

served with salad and tartar sauce

I contemplated between this or Grilled Chicken Fillets and decided to go with the former. Before placing the order for this, I inquired the kind of fish they use for the fillet. The waitress informed me that they use a kind of fish which is similar to seabass. The fish fillet was deep fried to perfection. It was juicy and the batter was crunchy too! The chips were honestly good in my opinion.

Verdict: The overall dining experience at Senja Restaurant was a good one as we pre-booked a private room to ourselves. Food were decent enough for our liking. However, there is a minimum spending quota required for private rooms. We only got to know this when I approached the counter for our dining bill as no one came after pressing the bill button twice.

According to the waitress, our minimum spending for the room should be at least B$30 per pax totaling up to B$180. So, she suggested that we order a few more mains or desserts to cover the minimum spending quota. It was about 10PM at the time we asked for the dining bill. It was almost impossible to order that much when we were so stuffed from the meal earlier on.

The waitress who attended told us that one of her colleagues had informed about this minimum spending policy when Chen Wei called in to book for the room. Chen Wei claimed that she wasn’t being informed. If she had been informed, I’m sure she would have notified us through our group chat.

It’s my second blog entry for today. I was outside running a bit of Company’s errand when other colleague who was also out with me suddenly remembered that it’s one of my staff birthday today. So, we bought her a birthday cake since we were just so nearby to Mum’s Bakery. Wanted to buy Fresh Yam Cake for her but it wasn’t freshly made this morning but yesterday.

Coincidentally, some of the staffs were bringing out a few freshly made cakes. So, I got her Oreo Mousse instead. She’s only 20 years old so I assumed that she’s gonna like Oreo since she likes sweet stuffs a lot.

This is the proper picture of her birthday cake but I like the following picture more. Looked more artistic but not focused on the wording at the centre. LOL!

It was Jia‘s 26th birthday yesterday. We were supposed to go for lunch or dinner together on last Sunday but she took a rain check few days before. So, we arranged to meet up for dinner tonight instead since she won’t be available for dinner yesterday evening as Stephen (the boyfriend) was celebrating with her. I asked her where she wanted to have her birthday dinner and she told me that she was craving for some sashimi so I gave her the benefit to choose between Kaizen Sushi Waterfront and Sushi Tei.

She chose Kaizen Sushi Waterfront as she doesn’t really like the food served at Sushi Tei. I called to reserve a table for two. Thank God that reservation had been made earlier as the place was pretty packed and we even have to wait for our table when reservation had been made earlier on. Both Jia and I were a little bit disappointed with some of the food served tonight.

A picture of the birthday girl “vain-ing” with my iPhone 4 coz she said her Samsung Galaxy S3 sucks with image quality.

Without further ado, let me show you what we had for dinner tonight. Anyways, kindly please pardon me the lousy quality for the following pictures. I couldn’t seem to get the right angles for the pictures tonight.

Both Jia and I were disappointed with their Sashimi (Sake) this evening as the slices were not as thick as what we had previously. If you were to compare with this picture, you could have seen the big difference. It was fresh but not the freshest and not so juicy either.

Feel like having some plain sushi, hence I ordered this for the both of us to share. 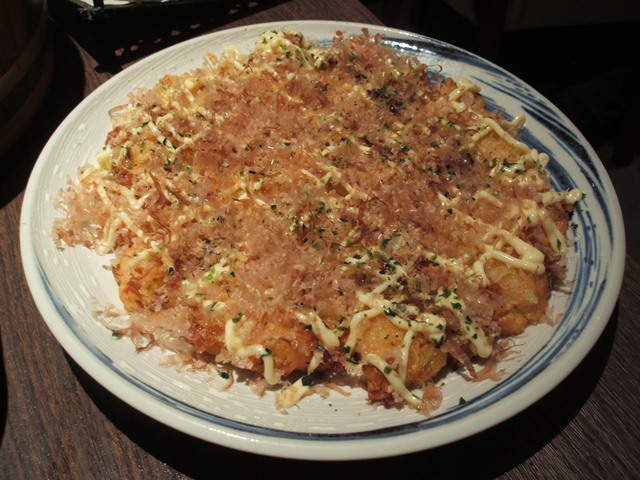 Kaizen Sushi Waterfront version of Okonomiyaki looked a bit different compared to the ones from Excapade Sushi, Kitaro Japanese Restaurant, Misato Teppan Grill and Gohan Sushi Restaurant. The batter was crispy and crunchy, topped with generous servings of bonito flakes and mayonnaise. This tasted not bad but not the best that I had tasted so far.

Nothing much to shout about for their Shitake Moriawase Tempura this time round as both Jia and I agreed that their Shitake mushrooms were not so fresh and juicy compared to what we had previously.

Sweet potatoes tempura. Crunchy if you eat it immediately after serving. Turned slightly soggy when both Jia and I tucked in with the last two pieces.

Been a huge fan of Temaki lately but I am so not gonna order this anymore. Should have stick with their Sake Temaki, which was way nicer!

We pretty much finished all the food that we ordered aside from the Okonomiyaki. We were both too full to finish the leftovers of Okonomiyaki. We were supposed to have desserts at MADbites Cafe but our tummy couldn’t take any more food so we decided to head home earlier instead.

Last but not least, Happy 26th my dear! We shall meet again one day for desserts as Part 2 of your birthday dinner. LOL!

Happy birthday, my dear! I know it’s already the next day of your birthday as I am typing away. But it’s better late than never, right? Anyways, it’s pretty late right now and my brain is not functioning properly. So, I am gonna make everything sounds brief and short. Just wanna wish you happy birthday and hope you’ll have a blast with your friends later during the day.

Can’t believe that it’s been a year since I returned to blogsphere!